Arbor Hill Winery is located in South Bristol just north of Naples, New York, at southern end of Canandaigua Lake in the famous Finger Lakes Region. In 1987 Arbor Hill opened in just one building. Now it sits in a complex of vintage buildings (including the original), in a wonderful warm New England country setting. The Brahm family takes great pride in the fact that they produce their products on the premises. In their country complex they have several buildings; one is the retail shop, another is Brew & Brats at Arbor Hill, and two barns serve as the wine cellar and the food production area.

In the early 1900’s, Anna Randall married Elmer Standish and, together, started a Naples grape-growing tradition that has spanned 4 generations. Today, John & Sherry French continue that tradition as owners of Arbor Hill, an award-winning producer of wines and gourmet food products.  Sherry’s father, John Brahm III, with a degree in Pomology from Cornell University and a successful 23-year career at Widmer Wine Cellars, started the business with the introduction of Brahm’s Wine Syrups. A year later in 1987, John and his wife, Katie, opened a farm winery to showcase the experimental grape varieties which have become the trademark of Arbor Hill. Sherry’s husband, John French, joined the family business in 2011, as they started a new venture with the opening of their restaurant, Brew & Brats. The restaurant, housed in a historic carriage barn, serves Bristol Springs brand craft beer, locally made brats, and a full complement of house wines. A visit to Arbor Hill, at the south end of Canandaigua Lake, promises to be a sensory-rich experience you will surely remember.

The Story of the Grape Pie

One of the area’s most popular attractions is the Famous Naples Grape Pie! The rich tradition began sometime in the 1960’s with Al Hodges, who commissioned Irene Bouchard to make this unique grape dessert for his historic Redwood Restaurant in Naples. Each year, during the Annual Naples Grape Festival (end of September), thousands come to celebrate the harvest and sample the grape pies. Today, dozens of bakers produce more than 30,000 grape pies during just six weeks of the year. 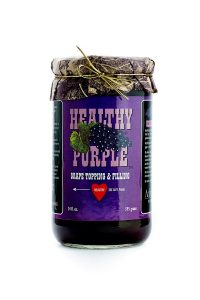 Grape pies have continued to grow in popularity. Some people have bought the grapes in an attempt to make their own filling. Most quickly gained a deep appreciation for the amount of work required to make the grape pie filling and eventually gave up on the idea.

If you are interested in making a grape pie, but don’t want the hassle of making your own filling, you’ll want to get some Healthy Purple Topping and Filling. It is a luscious grape product that contains the natural juice pulp and skin of the grape for the highest concentration of heart-healthy compounds. This versatile product is great as an “out-of-the ordinary” topping for cheesecake or vanilla ice cream. It’s also the perfect filling for kuchens, coffee cake or any other fruit-filled desserts. And, of course, GRAPE PIES!

The Story of Vergennes Wine

The History of Classic Traminette

The Legend of Bare Hill

Caring for the Vines